For last Father's Day, we created this extremely limited edition release, a blend of 34% Sangiovese, 33% Tempranillo and 33% Merlot, featuring the art of ALDO LUONGO. Why is this artwork so special? Because it is the only self portrait of Aldo Luongo with his father, nicknamed "The Hawk" peering over his shoulder.

EACH BOTTLE IS HAND SIGNED AND NUMBERED BY ALDO LUONGO!

For those who don't know the incredible story of The Hawk, read about him below. This robust wine has powerful flavors of dark berries, cassis, dried herbs and earth, followed by toasted French Oak have a smooth long lasting finish. 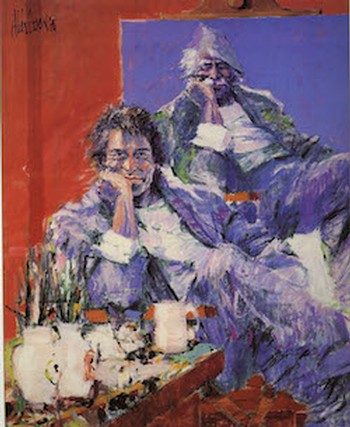 THE ART:
"Two Faces of The Hawk" by Aldo Luongo Printed on Canvas Labels
Only one Limited Edition on Canvas is still available for $2,200