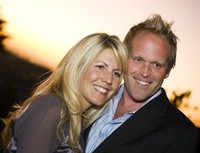 Artist Steven Quartly's pallet knife blends like Artiste wines!  "For me, every painting is a song," says the Quartly. Classical training in oil, which began at age 13 in Novato, California was the disciplined instruction upon which Quartly, has so rapidly built a career. Inspired by the 19th century impressionist masters through college, Steve's passion for painting grew. He attended Santa Barbara City College and then Azusa Pacific University (where he earned a B.A. degree in Fine Art in 1996).

In 2000, his paintings claimed "Best of Show" honors at the 2000 Orange County, California Plein Air Show. Today, a fast-growing nationwide gallery presence enables Quartly to paint every day in his Southern California studio. Summer journeys with wife Natalie through France, Italy, England and America's coastal cities have inspired much of his art. "Our trips have been more like pilgrimages," says Steven. "My desire is to bring emotion to the canvas," says Quartly- "a sense of remembrance, of quiet reflection and fresh surprises..."