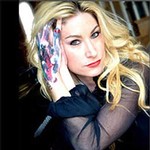 Coming from a musically enriched family, Danielle DeCarlo was destined to a life in the arts. Her grandfather, Angelo DeCarlo, tremendously successful in the restaurant and entertainment business, was a notorious “angel” to Frankie Valli and the Four Seasons and Frank Sinatra at critical points in their careers. He is portrayed in the Tony winning musical Jersey Boys. Her father, Lee DeCarlo, is the music producer and engineer, who shaped the music of many artists including John Lennon, Aerosmith, Kenny Loggins, and Chicago. He was nominated for five Emmys, won two, along with Album of the Year for “Double Fantasy”. Her mother, Olympia DeCarlo, graduated Julliard as a piano and theory major, teaches advanced skills to accomplished pianists and musicians, and taught Danielle to play at an early age. Danielle’s brother, Brett DeCarlo is the bass player, songwriter, and engineer for his own Los Angeles band.

Danielle’s painting is easily recognizable, because of her subject and technique. The paintings are all of women typically with their faces hidden. Her technique is impasto using oils with a variety of rich colors, using one knife for the entire painting. The thick oil adds an element of texture and movement. It’s a technique she discovered by accident. Recovering from a serious hand surgery, she did not have the flexibility in her hand or fingers to play piano, so she turned entirely to painting. Finding it impossible to grasp a brush, she discovered she could use a knife and create the effect she wanted, in fact - one she now cherishes and uses exclusively. Today Danielle lives in Los Angeles, painting and playing piano.

Ashleigh Sumner is a self-taught artist living in Los Angeles. Originally from North Carolina, Sumner received her B.A. in Theatre Arts before moving West to pursue an acting career in stage, film, and television. Influenced and inspired by the social, physical, and artistic environment of California, Sumner expanded her creative pursuits beyond the stage to the canvas. While Sumner is still professionally involved in the collaborative process of performance, she finds tranquility in the solitary process of painting. Learn more about Ashleigh Sumner on her website.

Mary Lauren Karlton is both worldly and artistic. With a Bachelor of Arts from Northwestern University and a Master of Arts from the University of Toronto, Mary is a professional writer, published author (a novel, a translation, poetry, and numerous articles), and CEO of GigPros, Inc., her creative services corporation that works with premier companies in Silicon Valley and beyond.  Her style is eclectic, ranging from realism to rich, highly textured works that combine elements of collage, photography, and abstraction. She is captivated by the versatility and expressive potential of acrylic media. Her heroes in the art world are multifaceted and innovative—DaVinci, Lautrec, Van Gogh, Picasso, Dali, Magritte, Klimt, Schiele, O’Keefe, DeKoonig, and Richter. Mary enjoys her life on the scenic central coast of California with her husband, Peter Sterbach—musician, composer, producer, and photographer.

R.W. Firestone is a clinical psychologist, author and psychotherapist, and Artiste's featured Modern artist for October 2011. As an artist, he works with the computer as a creative instrument, and has attempted to invent something feelingful, sensitive and beautiful out of an unfeeling machine. The computer, like all of man’s technological achievements, has been used for both good and evil machinations. R.W.'s art and insights into life are a very personal offering to others, a simple sharing of his feelings and perceptions. In his artistic productions, he utilizes a variety of images, impressions and approaches to address the fullness and complexity of his experience. In all of R.W.'s work, he works to blends color and composition into an enjoyable visual adventure.

The versatility of Masterpol’s work can be attributed largely to her refusal to study only one style or medium of art. As a result, her work remains true to her own depth and defies easy classification or style. She works intuitively, exploring with a fluid, inspired approach. Yet, just like the artist herself, the unity of her work is unmistakably genuine. A brave vulnerability shines through each stylistic excursion, revealing both the unconscious and conscious. Through her paintings, she intends to contribute to the world an alternative visual and emotional experience transcending the boundaries of what is already known and defined. She shies away from simply interpreting what the conscious mind records and deciphers — instead reaching deeper to allow the sanctuary of the unconscious mind to be unlocked. As a result, Masterpol’s paintings are at once both abstract and concrete.

Eight years ago during a trip to central Mexico, Santa Barbara artist Erika Carter became enchanted by the folkloric Retablos and X-Votos (small devotional paintings on tin or wood). Today, they are painted by local artisans and sold to tourists in the Mercado. The composition, color palate and narratives found in these small works inspired the direction of her work. Her goal is to create an uncomplicated narrative that transfers the empirical, spiritual nature of Mexico to others. Read more about Erika at her website.

Mick Reinman lives and works in Ojai, California. He attended Chouinard Art Institute and has been an artist and painter for over 25 years working in the entertainment industry on movies, advertising and commercials. In Mick’s work form becomes architectonic and Jungian. Forms facing each other create tension in the space in between and in their opposing surfaces. His Greek Crosses grew from this, creating a nine square grid, to become painted, confined negative spaces, the Cut series represents a further deconstruction — art, architecture and symbolism in coexistence.

Matti Berglund was born in Oslo, Norway and educated at the University of Denver in Colorado, where she received her BFA.  Matti's paintings have an organically spiritual quality both pleasing to the eye and soothing to the mind.  Matti's cultural history plays a large role in the appreciation of her work. Her pieces have a unique appeal due to her use of symbols and elements of folk art that were introduced to her as a child in Norway. Like her ancestors, Matti is true to her own skills and has allowed her practical and creative natures to work in unison. Her artwork offers proof that the imaginative spirit moves within her. Matti has shown her work internationally and has collectors worldwide.

John was born in Santa Cruz, California and received his MLA (masters of landscape architecture) degree from Cornell University in 2006. It was during his time at Cornell that he rediscovered his joy for painting. As expected, John is inspired by the natural and man-made landscapes that surround us, and most specifically aerial images of these subjects. Natural and environmental disasters, coastlines, and locations where man-made objects contrast with nature all have been subjects of his paintings. Some commissions are based on geographic locations that have sentimental meaning to clients. Often, he mixes soil, sand or grass found on site with the paint. He also likes to use found objects from the site, such as sticks or rocks as painting instruments. In doing this, the site is forever linked to the painting.

Karin Aggeler came to Santa Barbara from Munich, Germany in 1963. Since then she has participated in the Santa Barbara art community as a career potter and sold ceramics through shops and galleries throughout the US, Canada, and Europe.She has won numerous awards for her works. But drawing and painting were Karin Aggeler's primary interest before taking up clay 30 years ago. She returned to canvas in 2000, painting with acrylics. She works with layers of color, varying texture and calligraphy marks, sometimes coming from landscapes that she distills into basic shapes and hues before completely abandoning them in the final painting. She creates abstract art that embraces the experience and vision of the viewer, resulting in a dynamic continuous communication.

Jack N. Mohr, a native of Berlin, Germany, studied visual communication and earned a MA in graphic-design at the State University for Creative Arts in Berlin. 1997 he moved to Santa Barbara, California. He works in different mediums — collage, painting, sculpture, print, and ceramics. In his mainly abstract art he likes to explore how light and shadow, contrasting forms and structures or colors interrelate.